Corrosion resistance, of course, is one area where GFRP products shine. While the higher upfront costs of GFRP have delayed its widespread use, research and innovation in these areas are driving some of the changes that may soon open the vertical construction industry to greater use of GFRP-reinforced concrete.

The American Concrete Institute (ACI) Technical Committee 440 develops guides and standards for FRP Reinforcement, including ACI 440.1R-15, Guide for the Design and Construction of Structural Concrete Reinforced with Fiber-Reinforced Polymer Bars. “The 1R document is recognized not only in North America, but throughout the world as the document at the basis of this technology in vertical construction,” says Antonio Nanni, a professor of civil, architectural and environmental engineering at the University of Miami.

Four years ago, the ACI Technical Committee opted to not revise the document and instead embarked upon the lengthy process of developing a code that lays out mandatory language for how to appropriately design and build using FRP-reinforced concrete for structural applications. Upon its publication in 2022, the document – tentatively titled Code Requirements for Structural Concrete Reinforced with FRP Bars and Commentary – would be referenced by ACI 318, Building Code Requirements for Structural Concrete, the basis for the design of every reinforced concrete building in the country. Through the new code’s reference in ACI 318, it would become incorporated into the International Building Code (IBC).

Since ACI 440.1R was last updated in 2015, a lot has changed in understanding the science behind FRP in these applications, and the committee has worked through these advancements. Nanni notes that some of the safety factors have been relaxed due to greater awareness of material properties. For example, he points to growth in knowledge around creep rupture. 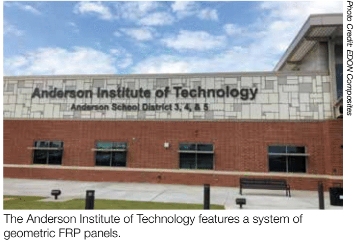 “Composites have a peculiar behavior when subject to sustained load,” Nanni explains. “They suffer static fatigue.” Creep rupture describes the material’s failure over time after sustaining constant uniaxial loading. ACI 440.1R-15 sets the coefficient for ensuring that this creep rupture does not occur at 0.2, or 20% of the FRP’s strength under immediate load. However, that number was derived in 2001 using limited test data and few standards around the materials or test methods.

“Today, we can safely say it’s 30%,” Nanni says, adding that some data indicates this number could rise considerably higher in the future. “This is very significant, in that we have made the use of composites more competitive with respect to steel. Not because we look at saving money necessarily – although that is one outcome – but because we have better science to address these issues.”