One of the pleasures of driving an electric car is its quiet operation. But the peace that motorists gain comes at a price for automotive designers. Without the constant rumble of an internal combustion engine masking other noises, they have to find a way to silence normal vehicle sounds that had previously gone unnoticed. Unfortunately, the fixes for those unwanted sounds often have a negative impact on the efficiency of electrical vehicles (EVs).

Some researchers in the United Kingdom believe that composite materials may provide a solution. The National Composites Centre (NCC), which partners with industry to drive innovation in composite design and manufacture, is working with the engineering consulting firm Drive System Design on a 12-month project to study the use of composites for integrated electric drive units (EDUs) in electric vehicles. The goal is to increase the efficiency of the EDUs without negatively affecting their noise, vibration and harshness (NVH) characteristics.

The electric drive units in EVs consist of a motor, transmission and inverter, which converts the DC power in the battery to the AC power required by the electric motor. In fossil-fuel vehicles, these three components may be located in different areas of the engine, but in EVs, where the emphasis is on weight reduction, the three subsystems are more often being integrated into one compact housing, which is the EDU.

“The advantage is really around package density and how much performance you can have within a given space or mass,” explains Markus Hose, head of mechanical engineering at Drive System Design (DSD). The problem is that in the initial design stages of EDUs, the focus is almost exclusively on their efficiency. Consideration for total system NVH often occurs late in the development program, and the solution often reduces the vehicle’s performance. “If you have a noisy motor, for example, you typically have to do things to it that will reduce its efficiency,” Hose adds. 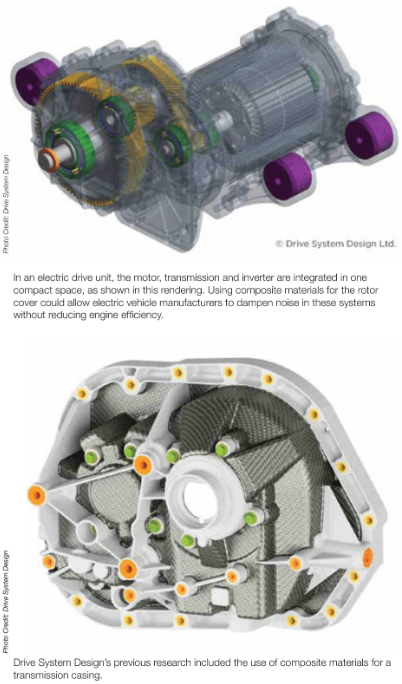 During the year-long research project, the partners will investigate whether the use of composite materials can help balance NVH and EDU efficiency. “We wanted to start with the NVH characteristics at the beginning of the design stage rather than address them at the end,” Hose says. If rotor covers made from composites materials dampen NVH up front, designers will have more freedom to increase the power in, and thus the efficiency of, a compact EDU.

In the initial research phases, NCC researchers have been studying the properties of several different kinds of composite materials. “The first question we’ve got to ask ourselves is which composites give us which performance benefits in which NVH characteristics,” says Hose. One challenge is to understand the damping characteristics of different types of composites. (Damping is the ability of a material to reduce the resonances that cause noise and vibration.)