GFRP beat out traditional steel rebar based on life-cycle cost analysis for the rebuilding project because of its extreme durability. The seawall along Flagler Beach is expected to last 100 years or more with little to no maintenance.

“The biggest thing with steel-reinforced marine structures is that once chlorides get into the concrete and the reinforcing, you get rust, degraded concrete and even pieces falling off,” says Lowry Denty, P.E. of Mott MacDonald Florida, LLC, the engineer of record for the project. “It’s a lot of repairs.” In contrast, the GFRP-reinforced seawall “should never have any maintenance issues until it reaches its design life,” he says. 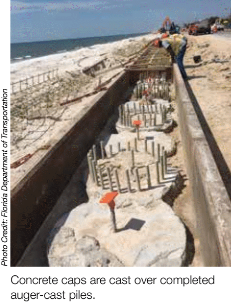 The seawall contains 1,847 piles with GFRP rebar and rebar cages supplied by Pultrall Inc., an FDOT-approved fiberglass reinforcement manufacturer in Thetford Mines, Quebec, Canada. The company’s V-Rod rebar, made from high-strength glass fibers and vinyl ester resin, is pultruded, cured and then sand coated to increase concrete bonding capacity. Each V-Rod batch utilized on the seawall project was third-party tested at the University of Miami, which partners with FDOT on GFRP projects.

The Flagler Beach seawall is an auger-cast secant-pile wall system. The 36-foot-long, 3-foot-diameter piles were drilled with a steel tube encased hollow auger. Cement grout was then pumped in through the auger as it was withdrawn from the tube, and GFRP reinforcement was installed. To create the secant pile wall, 924 load-bearing primary piles that were heavily reinforced with conical GFRP cages were alternated and overlapped with 923 non-structural secondary piles reinforced with a single GFRP bar. After the piles were completed, a 4-foot-wide GFRP-reinforced concrete cap was cast on top, and the entire structure was covered with a sand dune.

Roxanne Fortier, sales coordinator for Pultrall, says contractors on the Flagler Beach project, who had not worked with GFRP before, needed reassurance. “Getting the contractor to have confidence in us and in the quality of the product was quite hard to do in the beginning,” she explains. The foremost concern was production time. V-Rod is made to order at Pultrall’s facility with two to four weeks’ lead time.

This especially affected the primary pile cages, which were assembled by tying 25 straight V-Rod bars together at one end with a special pile-toe assembly, spreading the bars into a cone shape and then securing them with outside spiral hoops.  Pultrall delivered enough pre-cut and preformed V-Rod for 104 cages a week for nine weeks, including 300,000 linear feet of No. 5 spiral GFRP rebar. (Rebar numbers represent a unit of 1/8-inch, so No. 5 rebar has a 5/8-inch diameter.) Fortier says that once the contractor adjusted to the process, it appreciated the convenience of receiving ready-to-assemble components.