Imagine hopping in an electric air taxi on a heliport atop your New York office and traveling 14 miles away to John F. Kennedy International Airport in just six minutes to catch a flight to Philadelphia for a meeting. Or, even better, skipping the commercial flight altogether and taking a 27-minute air taxi directly to your Philadelphia destination. That’s the goal of Lilium, an aviation company based in Munich.

Founded in 2015, Lilium has designed and prototyped the Lilium Jet, a five-seat, electric vertical take-off and landing (eVOTL) aircraft the company hopes will be fully operational in cities worldwide by 2025. Lilium is just one of dozens of companies working on aircraft for the budding urban air mobility (UAM) movement, from large OEMs like Boeing to small entrepreneurships and divisions of ride-hailing companies such as Uber Elevate.

“Urban air mobility is the use of low-altitude air space in, around and between cities for the movement of people and goods,” says Jonathan Hartman, disruptive technology lead with Sikorsky Innovations, part of Lockheed Martin. “It’s about adding a new dimension to the existing multimodal mobility networks that we already have.”

Urban air mobility may still seem like fodder for futuristic sci-fi movies, but it’s very much a tangible business in the here-and-now. As of September 2018, more than $1 billion had been invested in UAM, according to an urban air mobility market study conducted for NASA by the information technology consulting firm Booz Allen Hamilton.

“UAM will take the aviation industry and make it accessible to private citizens on a daily basis,” says Andrea Shestopalov, unmanned traffic management program manager for AiRXOS, part of GE Aviation. “The time is now for people to start getting in the game because there’s a tremendous opportunity to provide value.”

That opportunity extends to composites suppliers and manufacturers. “To make a vehicle that’s sustainable and feasible in this space, it’s going to have to be very light and very strong,” says Shestopalov. “And that’s where the composites industry can come in and be the only game in town.” 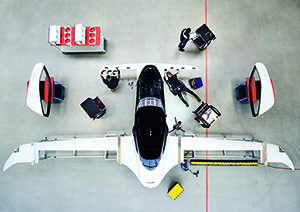 The concept behind urban air mobility isn’t new. “It’s a new term for a mission that has been executed for the last four or five decades by companies, including Sikorsky,” says Hartman. “Helicopters serve this mission today.” Traditional rotor-blade helicopters have been used in cities for functions such as critical care medical transport and media reporting on traffic, but they haven’t transformed into a ubiquitous mode of transport. Experts agree that’s poised to change, thanks to two key enabling technologies.

“People wonder why this time is different than all the others when they were promised flying cars,” says Ken Goodrich, NASA’s advanced air mobility deputy project manager for technology. “The real difference is advancements in automation and autonomy technology to simplify operation of the vehicles combined with electric propulsion, which helps dramatically reduce operation and maintenance costs, along with increasing community compatibility.”

eVOTL aircraft offer opportunities to improve urban congestion, enhance mobility, decrease transport time for people and goods, reduce pollution and decrease the strain on existing public transportation networks. These aims are all critical as the worldwide population continues to grow and migrate to urban and suburban areas.

“The United Nations (U.N.) says that millions of people per week are moving from rural areas to suburban and urban areas, and that’s a trend that’s going to continue for the next decade,” says Hartman. “Imagine a city the size of New York popping up on the globe once every month to month-and-a-half for the next 10 years.”

The 2018 U.N. report on the world’s cities cited by Hartman also indicates that by 2030 there will be 43 megacities – those with more than 10 million people – compared to 33 megacities around the world in 2018. The cost to develop and maintain the necessary ground infrastructure will be tremendous. “It’s an untenable position, and we’ll see more and more congestion,” says Hartman. “Utilizing the air space – the third dimension of mobility – gives you the opportunity to add rapid transport back into cities.”

While UAM presents undeniable opportunities, there are numerous challenges, most of which relate to three main areas: the vehicles, infrastructure and public acceptance.

“We need to get the vehicle technology to the point where it is available, manufacturable and reliable,” says Jim Sherman, director for strategic development for the Vertical Flight Society, a technical society for engineers, scientists and others working to advance vertical flight technology. Currently, he says, most vehicles are one-offs or prototypes, with a handful of companies conducting flight testing.

In the United States, the vehicles also must be certified by the Federal Aviation Administration (FAA). Given the wide variance in designs, this could be arduous. “The FAA has started to address that through adoption of performance-based regulations as opposed to prescriptive-based ones,” says Sherman. “Utilizing performance-based regulations based on industry standards by organizations such as SAE International and ASTM International will enable broader operational requirements, rather than highly prescriptive regulations.”

Perhaps the biggest hurdle related to the vehicles themselves centers around cost. “Building these vehicles needs to be much more cost effective than light aircraft are today,” says Goodrich. The UAM market will demand thousands of aircraft produced annually. But there’s a commercial risk, suggests Burak Uzman, general manager of Coriolis Composites USA, a provider of robotic cells and software for automated composite additive manufacturing. “Is there a business case for people to buy, lease or operate them?” asks Uzman. “That is highly dependent on the price tag of the air vehicle, and a lot of that will be driven by the composite airframe.”

The second primary area of consideration is infrastructure – everything needed to make the journey seamless from the take-off location to the landing location. This includes heliports, streets, elevators, buildings and more. “We are talking about an unprecedented level of integration of all these systems, both fixed and mobile infrastructure, in a way that is completely opaque to the users, but guarantees safety, reliability and availability,” says Hartman.

The final challenge – gaining public acceptance – is equally important to the hurdles associated with the vehicles and infrastructure. The introduction of a new modality of transportation into cities presents a host of societal barriers related to safety, privacy, noise and more. “UAM is an inevitable wave,” says Shestopalov. “The question is how do we get people on board more quickly? A lot of that has to do with proving out the technology and showing things can work – having use cases that are low risk.”

Many groups are focused on “showing things can work,” developing aircraft and technologies that will enable UAM. These include three highlighted here – a UAM startup, a traditional aerospace manufacturer and a large government agency.

Lilium’s four founders all attended the Technical University of Munich. When they launched the company with the mission to create a revolutionary urban air mobility solution, the co-founders evaluated more than 20 existing aircraft concepts, from multicopters to tilt rotor aircraft. None were quite what they were looking for, so the engineers designed an eVOTL with 36 engines mounted on its flaps.

The Lilium Jet features two fixed wings – one main wing at the rear and a canard wing at the front. The jet doesn’t have a tail, rudder, oil circuits, gearboxes or variable pitch fan blades. The only moving parts are the engines, which are distributed along the wings to distribute power and generate efficiencies. According to the company’s website, the simple design “makes the aircraft more robust, it makes it safer, it makes it easier to maintain and it lowers the cost to certify, manufacture and operate the aircraft.”