The team sent some of the reclaimed fibers back to the University of Kentucky and its other industry partners for cleaning, testing and processing into composite materials.

During the project’s second phase, which began in 2019, the focus has been on recycling wind blades and optimizing the process to produce a consistent glass fiber on the back end. “We ended up making a modification to the equipment and put in a port configuration and a new output design to ensure a minimal amount of physical stress on the fiber,” says Ludwig.

Another change was improving the consistency of the material that was fed into the Thermolyzer. The wind blades, which started out at 157 feet long and weighing about 15,000 pounds, were first cut into sections. After going through a mobile field shredder at Shred-Tech in Canada, the blade remnants measured a few inches wide and about a foot long. Approximately 1,000 pounds of those large pieces were further reduced with another shredding. The goal was to minimize the amount of very large pieces in the mix and make the remnants more uniform. These pieces were then sent to Germany for recycling in the Thermolyzer.

The composite remnants were processed in two batches. “[During Phase A] we swept through from the low end to the high end of the temperature range, and we found a temperature range that was the processing sweet spot,” Ludwig says. Phase B confirmed that finding.

“You want the temperature and the processing conditions set so that as you feed the material in on a continuous process, you’re getting the very best flow. You’re getting an optimization of what you believe will be the right kind of fiber properties,” he says. “By having a lower temperature and a really consistent optimal throughput, we’re likely to have the very best processing conditions that you could get for the wind turbine blades.” 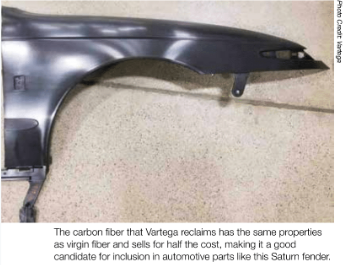 CHZ believes that it could run the machine continually every day with this material and replicate the test results. “Our goal is to optimize the properties on the back end and make them consistent so they can be reused in the same type of application. You don’t want to find that the recycled material works really well one day and the next day it doesn’t,” Ludwig says.

The team was able to regain just over 200 pounds of fibers during this process. Oak Ridge National Laboratory (ORNL) has retained some of the fiber and is sending the rest to end users, who will test the material’s properties, add a binder and then try it out in different composite applications. Initial results should be available this summer.