Drones and autonomous lightweight vehicles may begin delivering packages to homes and businesses in the coming decade, but their customers will be clustered around urban areas. Startup Elroy Air is aiming to provide a very different kind of unmanned delivery service. Its lightweight aircraft, manufactured primarily from composite materials, is designed to carry up to 300 pounds of packages to remote and often otherwise inaccessible locations.

Clint Cope, Elroy Air’s vice president of engineering, and David Merrill, CEO, both with backgrounds in the drone industry, founded the company in November 2016. Since then, they’ve focused on developing an autonomous aircraft that can serve a variety of purposes, including quick delivery of relief products to disaster areas, assistance with military logistics operations and plugging a last-100-mile hole in delivery zones for logistics companies.

Cope says that many express delivery businesses are bound by service agreements to make deliveries that are inherently inefficient. “They may have to deliver to islands or to a remote customer at the end of a service area,” he says.

Suppose a pharmacy on an island located off the Washington state coastline or along the eastern seaboard has a customer who needs a prescription filled quickly. These areas may be served only by a ferry that makes limited trips from the mainland every day; a so-called “express delivery” may not arrive until the next morning. Or the customer could be a repair shop waiting for a critical part in a remote area like the Alaskan wilderness. “We can send autonomous aircraft in to do that,” says Cope.

The aircraft that will handle these jobs, the Chaparral, is 28.5 feet long, 6.9 feet high and has a 26.2-foot wingspan. It is a canard aircraft, with a forward wing placed in front of the main wing. Six rotors lift the aircraft, and a single forward, push-up propeller moves it through the air. The Chaparral requires only a 50 x 50-foot area for landing and takeoff. 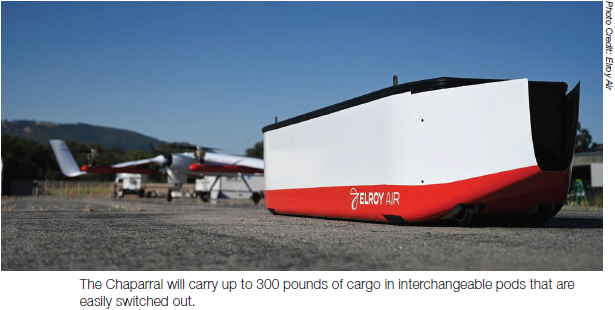 The Chaparral’s cargo is carried in a separate, interchangeable pod, which gets securely locked onto the exterior underside of the craft during flight.

The body of the early Chaparral is slated to be made from thermoset composites manufactured through resin transfer molding. Elroy Air plans to use that process to create 50 initial production units over the next few years.

Elroy Air has found some promising ways to incorporate more thermoplastic composites into the aircraft. “We plan to get to the point where we will be making 250 aircraft a year, and we have to move our processes over to higher volume production methods with very low rejection rates,” Cope says. “One of the benefits we see from thermoplastic composites is that we can essentially start building a lot of the performance into the prepreg material itself.”