Highly customizable and incredibly durable, pultruded materials are finding growing demand in a tremendous range of applications. Market research firm Markets & Markets projects that the global pultrusion market will see a compounded annual growth rate of 4% from 2019 through 2024, reaching an estimated $3.4 billion.

The pultrusion process originated in the early 1950s to manufacture FRP composite profiles with a constant cross section. More than 70 years later, fabricators and material suppliers are exploring ways to shake up the process. Industry leaders will gather virtually for ACMA’s Pultrusion Conference April 13 – 15 to share the latest breakthroughs. In anticipation of the conference, Composites Manufacturing magazine provides a look at a few advancements in pultruded applications, manufacturing and materials.

One of the chief benefits of pultruded materials are the strength they bring to long spans. It’s one reason pultruded materials have become what Sascha Erbslöh, formerly with MHI Vestas Offshore Wind (MVOW), calls “the material of choice” for the structural building blocks of wind turbines, most notably the spar caps that serve as the skeleton of the rotor blade. (Last fall, Vestas agreed to acquire MHI’s shares in their offshore wind joint venture and has integrated MVOW into the Vestas group.)

Erbslöh says pultruded CFRP spar caps are inherently more efficient than those fabricated through earlier open-mold, wet lay-up processes. “The main advantage is, of course, that all the fibers are in the right direction,” he says. “[With an open-mold process] you can, in theory, put in individual unidirectional fiber layers, but if you infuse all that you always have a significant chance of creating wrinkles. That is almost completely eliminated if you use pultrusion.”

Erbslöh projects that this ongoing shift toward pultruded parts will drive significantly increased demand for technologies to support pultrusion as the wind energy market itself sees continued growth. The U.S. Department of Energy (DOE) projects that the United States will experience an increase from 113.43 gigawatts (GW) of wind energy in 2020 to 224.07 GW by 2030 and 404.25 GW by 2050.

That type of growth demands another critical characteristic: rapid manufacturing repeatability. That’s another clear advantage of pultrusion, Erbslöh says. “You can assemble it in a very controlled way with pre-manufactured parts. For the most critical parts, that is very advantageous.”

Speed in bringing turbines to market makes manufacturers more competitive and will further reduce energy costs which, in turn, will make turbine installations more attractive. The DOE notes in its 2019 Wind Technologies Market Report that the combination of more – and more efficiently performing – wind turbines is driving down wind energy costs to all-time lows of below two cents per kilowatt hour.

The DOE report adds that increased rotor diameters play an important role in boosting turbine efficiency. And pultrusion is a key enabling technology to building the next generation of larger, more efficient offshore rotors. 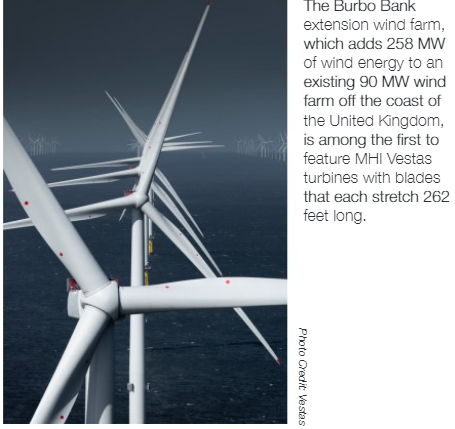 Today’s massive turbines are developed to operate efficiently for a minimum of 30 years in the harsh conditions of the North Seas, where wind speeds average around 22 miles per hour. “[Pultrusion] is enabling that kind of an industrial power plant,” Erbslöh says. Now, he adds, the engineering science needs to build upon what’s possible with the current pultrusion technology.

Among other areas, Erbslöh says that turbine manufacturers will find themselves digging deeper into material strength and load capabilities to better determine minimum design standards for safe turbine operation. “I think in the structural design calculations, a lot of partial safety factors get added by default,” he says. “Designers could significantly reduce the material, I think, if they would pay attention to this. I don’t think it is fundamentally a big challenge to improve those factors, but it needs the right focus.”

In addition, Erbslöh says, manufacturers are focusing on how to improve CFRP part protection against lightning strikes. While CFRP parts are structurally efficient, they create challenges on the lightning protection front. “It’s better to use all glass and non-conductive materials,” he says. “It definitely requires detailed engineering work and high-fidelity, multi-physics simulations to get a good lightning protection system in place – and a lot of work is going into ensuring that.”

A 2017 paper for the Nordic Insulation Symposium, “Lightning Exposure of Carbon Fiber Composites in Wind Turbine Blades,” notes that the manufacturing process can play a role in improving lightning protection. If considering two examples of unidirectional fibers, one conventional, in which the spars are assembled by laying up sheets of unidirectional fibers, and one in which the carbon fiber is pre-cured through pultrusion, the electrical conductivity matrix for the two processes can differ by a factor of five. Depending upon the specific properties targeted, that could mean pultrusion offers a fivefold improvement in electrical conductivity.

Durability is a key benefit of pultrusion and one reason it’s attractive to manufacturers in wind energy. But when it comes to durability, perhaps nowhere is this more important than in medical implants that must be made to last a literal lifetime.

Thermoplastics seem an ideal answer to this unique challenge as they offer critical fracture toughness, as well as rigidity and the temperature, humidity and corrosion resistance necessary to use within the body. This could potentially end the corrosion to which metal implants have long been prone. Corrosion of artificial hips, for example, has been linked to metal poisoning that leads to bone and tissue death and implant failure.