In October, Italian firm Moi Composites made a splash at the 2020 Genoa Boat Show by driving the world’s first 3D-printed GFRP boat into a nearby harbor. The MAMBO (Motor Additive Manufacturing Boat) is a 21.5-foot long speedboat constructed with parts made from glass fiber and vinyl ester resin.

The boat was inspired by the 1973 Arcidiavolo, an offshore racing boat designed by the father of modern speedboats, Sonny Levi. However, the MAMBO is anything but traditional with its deep undercuts and narrow geometries made possible by moldless, digital manufacturing. “You cannot manufacture this shape using traditional composite manufacturing technology,” says Gabriele Natale, CEO of Moi Composites.

Later that year, the researchers developed a now-patented continuous fiber manufacturing (CFM) process for glass and vinyl ester. After three years of honing the technology, they spun off Moi in 2018. The company initially produced small-scale prototypes of bicycle frames, prostheses, skateboards and furniture. Soon, however, they decided to demonstrate the scalability of their process by 3D printing the MAMBO for the Genoa Boat Show. 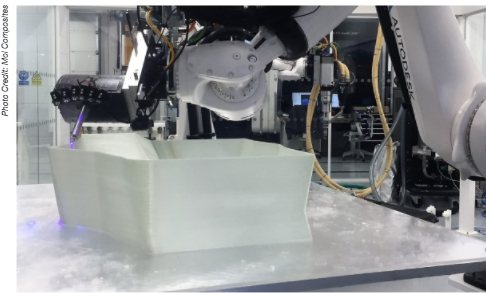 Natale says it was the perfect venue. “Every year, they present really new, cool concepts there,” he says. “But they are often hard to reproduce using traditional composite technology. That is why the MAMBO has this organic, really extreme shape. We printed it to demonstrate that by using a digital process you can push forward creativity and imagination.”

The MAMBO’s 50 GFRP parts were fabricated by pulling Owens Corning’s SE1200 single-end Type 30™ roving through a vinyl ester resin bath formulated in-house, then feeding the roving to a Kuka KR QUANTEC robot for placement. Moi printed half of the components in Milan, while Autodesk printed the other half in its advanced manufacturing facility in Hampshire, United Kingdom. The GFRP parts ranged from 20 inches in length for the tip of the boat to five feet for the beam. Each component was designed with a male and a female attachment that fit into those of adjacent parts to create a continuous, overlapping structure.

Interested in using composites in the marine industry? Learn more about certifications in the following areas: