The Concorde, the first supersonic aircraft offering passenger service, transported people from the eastern seaboard of the U.S. to Paris and London in half the time of standard commercial airlines. But in 2003, after 27 years of trans-Atlantic flights, the aircraft was shuttered because of steep operating costs, inefficient fuel consumption and environmental concerns. While no company has yet succeeded in filling the void, several are working on supersonic commercial aircraft, including Boom Supersonic.

Founded in 2014 by Blake Scholl, Boom is developing Overture, a Mach 2.2 commercial airliner that will seat 55 to 75 passengers. The company is confident the time is right to relaunch supersonic travel. “Decades of technological advancements and an improvement in fuel efficiency versus the Concorde enable us to build a supersonic airliner with dramatically better operating economics,” says Scholl, CEO of Boom Supersonic.

Since its inception, Boom has been working on the XB-1, a one-third scale demonstrator of the Overture. “It will demonstrate key technologies for mainstream supersonic flight and help refine the design and engineering of Overture with similar key technologies – advanced carbon fiber composites, as well as aerodynamic and propulsion design and analysis,” says Scholl.

During the past year, the company has reached several engineering and production milestones on the demonstrator. It completed wing testing, conducted the first flight of Boom’s second-generation simulator and finalized several critical bond events – the systems bay and main landing gear bay into the fuselage and the closeout of the right-hand and left-hand fuselage skin. The team at Boom will finish construction of the XB-1 this year and begin flight tests in 2021 at the Mojave Air & Space Port in California.

Composites are integral to the XB-1. The fuselage, wings, vertical tail, horizontal tail, inlets, ailerons and rudder are made from Toray’s TC350-1 toughened epoxy prepreg reinforced with IM7 carbon fiber. Only the engine nacelles and aft fuselage are metallic.

“Material selection – specifically the resin system – is critical to ensure that strength is maintained at the elevated temperatures the XB-1 will experience in flight,” says Mike Jagemann, director of XB-1 production for Boom. Standard commercial airframes operate in temperatures ranging from 160 F to -65 F, according to the company. “At Mach 2.2, it is possible that the XB-1 structure will see in excess of 300 degrees for several hours at a time,” says Jagemann. 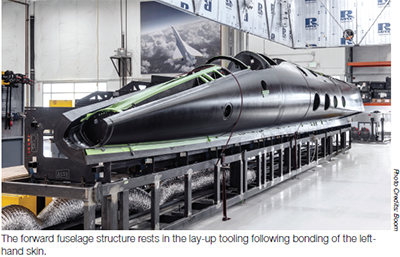 The fabrication processes utilized for the demonstrator vary widely based on the type of structure. Parts are laminated on different tools depending on what is most economical because the company is only making one of each part. These include carbon face sheet tooling (prepreg and infusion), billet aluminum tooling and CFOAM®-based carbon foam composite tooling. “All of these are hand lay-up with the use of laser projection for ply placement,” says Jagemann.