The project began in 2019 when the Bogota Water Utility asked Soling to develop a new cover system for the 167,902-square-foot concrete tank. Built in 1971, the tank’s aging asbestos and concrete covers were increasingly difficult to repair and a risk to public health. 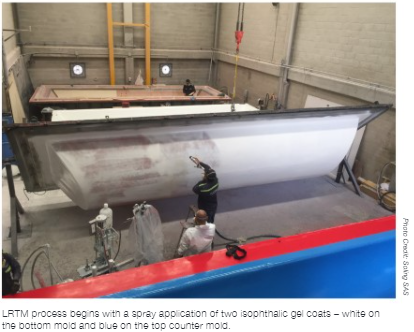 Soling’s engineering team chose to replace the flat cover panels with 25 x 8-foot GFRP semi-circular domes. The geometry ensured the best mechanical resistance, which was key to protecting the cover from children participating in a local pastime – throwing stones onto the tank from the surrounding hillsides.

Designing each 306-square-foot domed part to be light enough for the existing concrete support columns was tricky. “Weight was the biggest challenge to this project,” says Rodrigo Vergara, engineering coordinator at Soling. “We could not exceed the load capacity of the current structure.”

This meant that each cover component had to weigh less than 706 pounds. While Soling had extensive experience using open molding technologies to produce tanks and other water applications, the strict weight limit required a new approach – LRTM. “It was just not possible to do it any other way other than closed mold to limit the weight of the laminated covers. Open mold wasn’t an option,” says Andres Collazos, Latin America sales manager for Magnum Venus Products (MVP), Knoxville, Tenn., which provided equipment and technical assistance along with local distributor Minepro SAS, Medellín, Colombia.

In addition to helping lightweight the massive parts, LRTM also provided an aesthetically pleasing finish. “The client didn’t want a pipe-like GFRP. They wanted a shinier, beautiful cover and they wanted two colors – a blue exterior and a white interior,” Vergara says, “The only way to meet these specifications was light RTM.” He says LRTM also provided 100% uniform parts.