The fabrication process began with a spray application of two isophthalic gel coats – white on the bottom mold and blue on the top counter mold. Technicians then climbed into the mold and laid up 2- to 4-layer combinations of chopped glass fiber mats and two multidirectional mats from Jushi. The mold was then vacuum sealed and injected with Andercol thermoset polyester resin. The project used two tons of resin per day. Total fabrication time per part was four hours, including a 40-minute injection cycle. 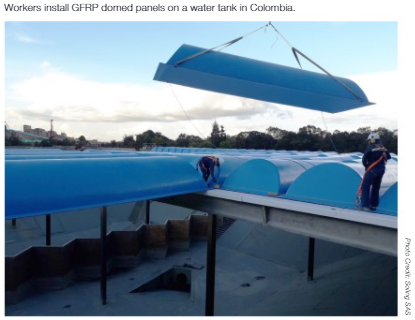 The only piece that did not inject correctly was the first test piece. After the resin was reformulated for lower viscosity and a longer gel time and the brackets holding the mold and counter mold together were adjusted to better hold the perimeter vacuum, all of the domed panels were fabricated without interruption – or waste. “That was a huge win because when you estimate that the 706-pound part includes 461 pounds of resin, mistakes are an expensive undertaking!” Collazos says.

As each batch of cover parts was completed, they were immediately shipped 30 at a time to the installation site and installed by crane. The water utility and Soling were very pleased with the results. “We were able to take advantage of all the attributes of this type of material,” says Soling SAS CEO Javier Moreno. “We reduced the weight of the covers and at the same time increased the mechanical performance, aesthetics, system safety and the quality of water stored in the tank. Having made the largest part manufactured in the region using the light RTM process opens up opportunities for similar applications.”

While Soling now has the equipment and expertise to tackle LRTM applications, the company is an outlier in the region. Collazos says that open mold fabrication remains dominant because of low labor costs and other factors, but that is beginning to change. “We have noticed an uptick in demand for closed mold solutions,” he says. “But this is a recent development. Two years ago, there really wasn’t much at all.”

Soling is currently considering its next LRTM applications, including underground electrical boxes. Meanwhile, Collazos sees enormous opportunities for LRTM in fabrication of large panels for municipal and interstate busses. “That is a huge business in Latin America,” he stresses. Whatever is next, Soling is ready.